If you are a registered iGarden member please feel free to join in and add your own comments, or start a new discussion topic. 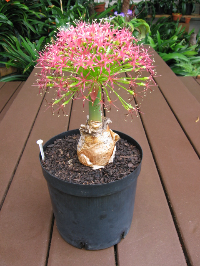 Here are photos of another specie in the Boophone family the Boophone disticha. The first photo is of the complete plant 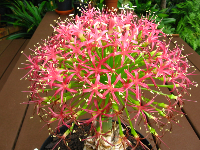 Here is a side side view of the flower head 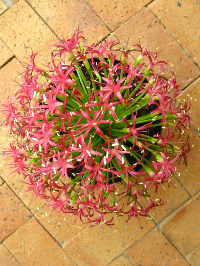 This is a top view of the flower head 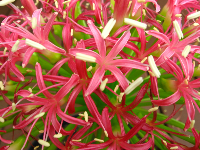 This is a close up view to show the details of the flower head. 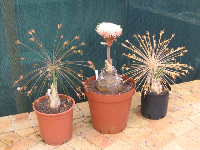 For the members that are not familiar with this plant I would like to explain a very interesting performance of the Boophone which applies to Brunsvigias as well. Once the flowers are pollinated the flower pedicles extend about 3 or 4 times until the seeds have matured. The flower head then starts to dry and when all the seeds in the seed pods have matured the flower stem breaks off and the wind blows this round flower ball away and so the seed pods breaks open to disperse the seeds. Here is an example of the extended semi dry pedicles on a Boophone disticha on the left and a fully dry flower head of a Boophone disticha on the right compared to the flower head of the Boophone haemanthoides in the middle. 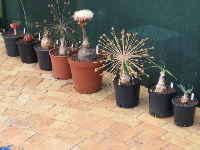 This is a group of Boophones in various stages of flowering and you will notice some of them are already starting to grow their leaves after the flowers are spent. 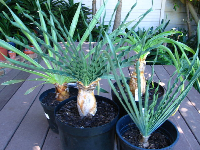 Peter, This is a group photo of some of my Boophone disticha. 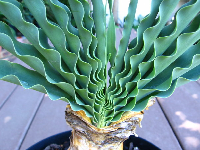 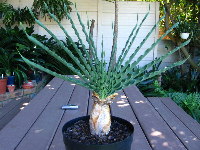 This photo is the above plant in full 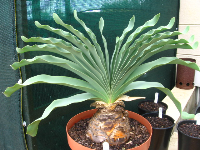 This is my biggest Boophone haemanthoides. The leaves are much wider than B disticha and the bulbs grow much larger.

Deirdre - The Compulsive Gardener Sunday, 03 June 2012
They are amazing, Heinie! I have never seen them growing here. Thank you for showing them to us.
Peter - 2122 Monday, 24 September 2012
Thanks, Heinie. The leaves are just magnificent! I hope your photos spur other readers to want to grow these wonderful plants
Maureen - 2118 Monday, 25 February 2013
How fantastic - leaves fascinating as well as beautiful blooms.
Heinie - South Africa Monday, 25 February 2013
Thank you Maureen
Gustav - South Africa Sunday, 06 April 2014
Heinie, if one doesn"t have any particular bulb that you want to swop, would you be prepared to sell?
Barbara - 2081 Sunday, 21 September 2014
Heinie, I have just viewed these plants.....they are fantastic!!!! I have a friend who is travelling to Durban in November. Do you know if seeds can be purchased in that city? If not, I think you should consider exporting them to Australia. Please put me on the "I Love Them" list and I certainly want some. Congratulations! they are stunning. Best wishes, Barbara - Sydney/Australia.

* You can only post comments in the forums if you are Signed-in. If you are already registered please go to the Home page and Sign-In first. If you are not an iGarden member please click here to register now.

New subject on this theme?

Start a New Discussion Topic
Back to main Forum list »